Great job! Do you want to try another literature quiz?

Do you want to try another literature quiz?

The Outsiders is a novel by S. E. Hinton, first published in 1967. Hinton was 15 when she started writing the novel, but did most of the work when she was 16 and a junior in high school.

#3. What nationality was Mikhail Sholokhov, winner of the 1965 Nobel Prize in Literature?

Mikhail Sholokhov was a Soviet/Russian novelist and winner of the 1965 Nobel Prize in Literature. He was born in Veshenskaya, Russian Empire, which later became Soviet Union.

#4. The fictional character William Fisher is also known as:

I Know Why the Caged Bird Sings is a 1969 autobiography about the early years of American writer and poet Maya Angelou.

#6. Which of these is a novel by Leonard Cohen?

Beautiful Losers is the second and final novel by Canadian writer and musician Leonard Cohen. It was published in 1966, before he began his career as a singer-songwriter.

#7. The Agony and the Ecstasy by Irving Stone is about which famous person?

The Agony and the Ecstasy is Irving Stone’s classic biographical novel of Michelangelo.

#8. Which fictional character lives in the village of St. Mary Mead?

Miss Marple is a fictional character in Agatha Christie’s crime novels and short stories. She lives in the fictional village of St. Mary Mead.

In His Own Write is a book written by John Lennon and first published in 1964. It consists of poems, short stories, and line drawings. With the Beatles success at the time, an initial printing in England sold 50,000 copies the first day. In 1965, it was followed by a second book by Lennon, A Spaniard in the Works.

Up the Down Staircase is a novel written by Bel Kaufman, published in 1964. In 1967 it was released as a film starring Sandy Dennis, Patrick Bedford, and Eileen Heckart.

Several of John le Carré’s spy novels from the sixties featured the fictitious British intelligence organization, The Circus, and its agents George Smiley and Peter Guillam.

John Ernst Steinbeck was awarded the 1962 Nobel Prize in Literature for his realistic and imaginative writings, combining as they do sympathetic humour and keen social perception. He is widely known for the novels The Grapes of Wrath (1939), Cannery Row (1945), and East of Eden (1952).

The Nobel Prize in literature has not been awarded to Truman Capote or Arthur Miller. Ernest Hemingway was awarded the prize in 1954.

#13. Felix Leiter is a fictional character created by which author?

Felix Leiter is a fictional character created by Ian Fleming in the James Bond series. The character is an operative for the CIA and Bond’s friend.

#14. The film Doctor Zhivago is a drama film based on a novel by which author?

Doctor Zhivago is a 1965 epic romantic drama film directed by David Lean and based on the 1957 Boris Pasternak novel Doctor Zhivago.

#15. Which author and Nobel Prize winner wrote Waiting for Godot?

Waiting for Godot is a play by Samuel Beckett. He was awarded the 1969 Nobel Prize in Literature. Beckett lived in Paris for most of his adult life and wrote in both English and French.

#16. In what country was Nelly Sachs, the 1966 winner of the Nobel Prize in Literature, born?

Nelly Sachs was a Jewish German poet and playwright. She was born in Schöneberg, Germany. In 1940, she fled to Sweden and lived there to her death in 1970.

She shared the 1966 Nobel Prize in Literature with Shmuel Yosef Agnon.

#17. Captain John Yossarian is the main character in which of these novels?

Catch-22 is a novel by Joseph Heller. It is set during World War II, from 1942 to 1944. It mainly follows the life of Captain John Yossarian, a U.S. Army Air Forces B-25 bombardier.

#18. The film Breakfast at Tiffany's is based on a novella by which author?

#19. Who is the fictional character Oliver Mellors?

#20. Charlie and the Chocolate Factory is a novel by:

Charlie and the Chocolate Factory is a 1964 children’s novel by British author Roald Dahl. It tells the adventures of young Charlie Bucket inside the chocolate factory of eccentric chocolatier Willy Wonka. 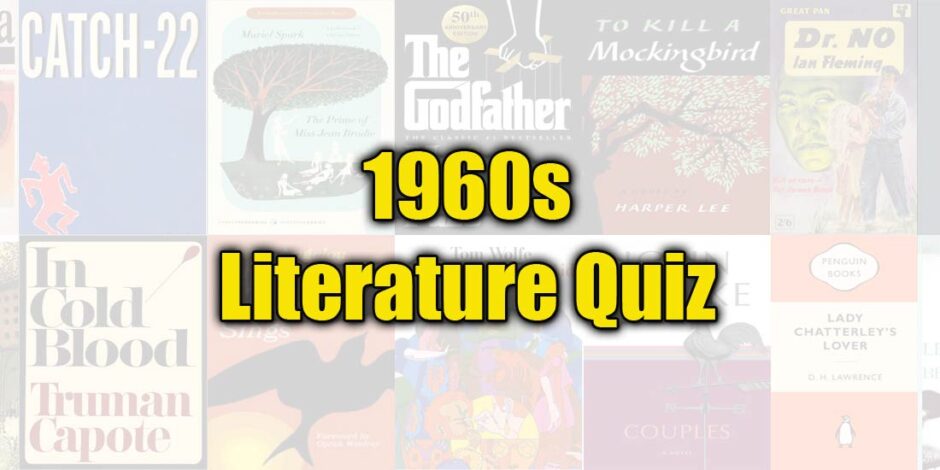 This quiz about Books from the Sixties

This hard quiz has 20 questions about classic literature published in or describing the 1960s. How well do you know authors, books, themes, and characters?

The quiz has questions about some of the selling novels in the 1960s, but also about those novels that became classics later on.

You should also know your Nobel Prize in Literature from the 1960s to get a full score on this quiz.

Let us say this from the beginning: it is a hard quiz, unless you love reading and love to talk about books, especially the classics.

Just like the music of 1960s evolved, literature was also inspired by the special turbulence of this decade. 1960s phenomenon like the Civil Rights Movement, antiwar protests, teenage counterculture, and minority activism found their way into literature and attracted new readers.

Ken Kesey made his debut in 1960s with One Flew Over the Cuckoo’s Nest, a link between the Beat Generation of the 1950s and the hippies of the 1960s.

The well-known To Kill a Mockingbird by the American author Harper Lee is also a classic that was first published in 1960.

Catch-22, the anti-war novel by Joseph Heller, was first published in 1961.

In 1963, book lovers could get their hands on The Bell Jar, the only novel written by poet Sylvia Plath.

Other authors that med their debut during the sixties include Jacqueline Susann (Valley of Dolls), Emmanuelle Arsan, S. E. Hinton (The Outsiders), and John le Carré (Call for the Dead).