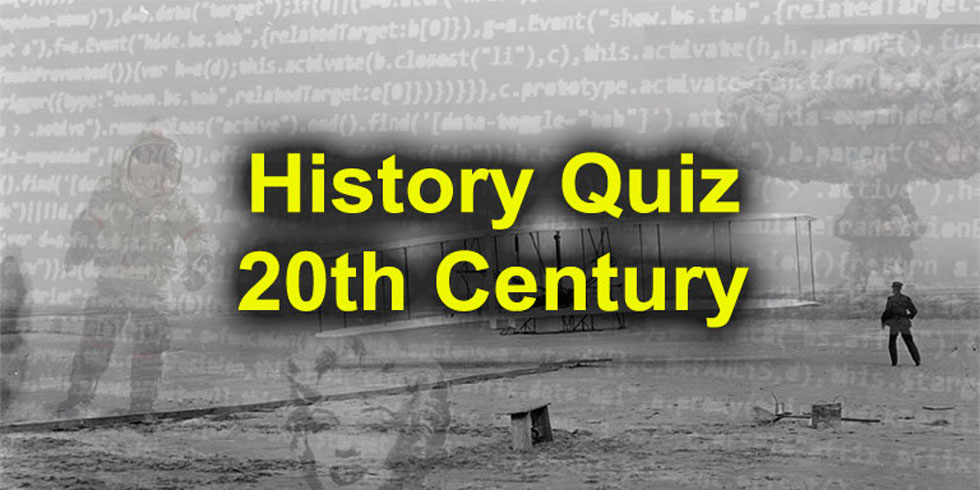 Great score! Do you want to try another history quiz?

Do you want to try another history quiz?

#1. The Marshall Plan to rebuild Europe was passed into US law in 1948 by:

Harry S. Truman was the 33rd President of the United States of America between 1945 and 1953. Under Truman, the U.S. successfully concluded World War II. He assisted in the founding of the United Nations, issued the Truman Doctrine to contain communism, and passed the Marshall Plan to rebuild Europe.

#2. What archipelago was the focus of an armed conflict between the United Kingdom and Argentina in 1982?

The Falklands War was a ten-week war between Argentina and the United Kingdom in 1982.

#3. Titanic sank on her maiden voyage from Southampton to:

Titanic was a British passenger ship that sank in the Atlantic Ocean after colliding with an iceberg during her maiden voyage from Southampton, UK to New York City, US.

Adolf Hitler was chancellor of Germany from 1933 to 1945, and leader of Nazi Germany from 1934 to 1945. As dictator of the German Reich, he initiated World War II in Europe with the invasion of Poland in September 1939 .

On June 11, 2009, the World Health Organization raised the worldwide pandemic alert level to Phase 6 for swine flu, which is the highest alert level. It meant that the swine flu had spread worldwide and there were cases of people with the virus in most countries.

Pol Pot was a Cambodian communist revolutionary and politician. From 1976 to 1979, he served as the Prime Minister of Democratic Kampuchea.

#7. The first human-to-human heart transplant is performed which year?

The first human-to-human heart transplant is performed 1967 in South Africa. The operation is a success, but the patient dies after complications set in.

#8. The military operation known as Desert Storm was part of which war?

Operation Desert Storm (17 January 1991 Ã¢â€šÂ¬Ã¢â‚¬Å“ 28 February 1991) was the combat phase of the Gulf War, a war waged by coalition forces from 35 nations led by the United States against Iraq in response to Iraq’s invasion and annexation of Kuwait.

#9. What was opened in 1914 to allow a quicker passage from Atlantic Ocean to Pacific Ocean?

The Panama Canal is a ship canal in Panama that connects the Atlantic Ocean to the Pacific Ocean. The canal officially opened on August 15, 1914.

#10. The Invasion of Normandy during World War II was which year?

D-Day, the date of the initial assaults, was Tuesday 6 June 1944. By 4 July one million men had been landed in Normandy. The invasion was a significant turning point in the war.

Earth Day is an annual event celebrated on April 22. First celebrated in 1970, Earth Day now events in more than 193 countries.

#12. World War I followed the assassination of Archduke Franz Ferdinand. He was killed in which city?

The assassination of Franz Ferdinand of Austria in Sarajevo triggered Austria-Hungary’s declaration of war against Serbia. This caused the Central Powers (including Germany and Austria-Hungary) and Serbia’s allies to declare war on each other, starting World War I.

#15. Who was President in United States during the September 11 attacks?

#16. Who was the first American President to resign from office?

The first American President to resign from office was Richard Milhous Nixon. He was the 37th President of the United States, serving from 1969 to 1974. In light of his loss of political support and the near-certainty of impeachment, Nixon resigned the office of the presidency on August 9, 1974.

Gandhi led India to independence and inspired movements for civil rights and freedom across the world.

#18. Which year was Diana, Princess of Wales, fatally injured in a car crash in Paris?

Diana was the first wife of Charles, Prince of Wales. Following her divorce in 1996, she officially ceased to be The Princess of Wales. Instead she adopted: Diana, Princess of Wales. She continued to be a Princess of the United Kingdom of Great Britain and Northern Ireland without the style Royal Highness. She was fatally injured in a car crash in Paris on 31 August 1997.

#20. Elizabeth II became Queen and Head of the Commonwealth in 1952. Who was her predecessor?

Elizabeth II has been Queen of the United Kingdom, Canada, Australia, and New Zealand, and Head of the Commonwealth from her accession in 1952. Her predecessor was George VI.

The 100-year span from 1900 to 1999 had important shifts in culture, technology, politics, and economics.

Many political leaders made important imprints during this century. Dictators came to power in several countries, even in the western world.

How many of them do you remember?

Two world wars were fought in the 20th century. Everyone learned about the disastrous consequences of the nuclear bomb. The Vietnam War engaged a whole generation in the sixties.

Mankind took a giant step into space. Remember who took the first step?

New technologies such as PCs and Internet forever changed the way we live and communicate. Do you remember these inventions and when they were introduced?

Take this 20th century history quiz now and see how well you can score!