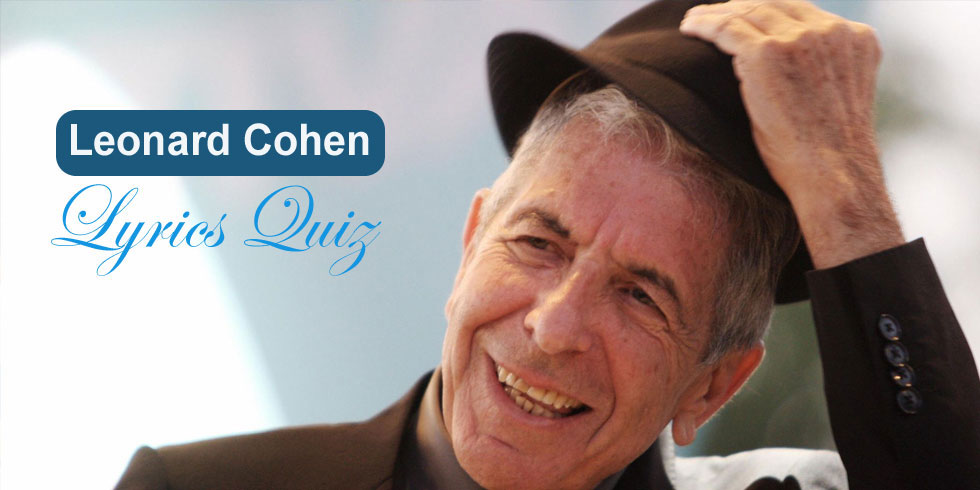 Well done, this better than the average result.

Slightly below the average result for this quiz.

#1. And if you call me brother now, forgive me if I inquire,
Just according to whose plan?

The door it opened slowly,
my father he came in,
I was nine years old.
And he stood so tall above me,
his blue eyes they were shining
and his voice was very cold.
He said, I’ve had a vision
and you know I’m strong and holy,
I must do what I’ve been told.
So he started up the mountain,
I was running, he was walking,
and his axe was made of gold.
Well, the trees they got much smaller,
the lake a lady’s mirror,
we stopped to drink some wine.
Then he threw the bottle over.
Broke a minute later
and he put his hand on mine.
Thought I saw an eagle
but it might have been a vulture,
I never could decide.
Then my father built an altar,
he looked once behind his shoulder,
he knew I would not hide.

You who build these altars now
to sacrifice these children,
you must not do it anymore.
A scheme is not a vision
and you never have been tempted
by a demon or a god.
You who stand above them now,
your hatchets blunt and bloody,
you were not there before,
when I lay upon a mountain
and my father’s hand was trembling
with the beauty of the word.

Bird On The Wire:

Like a bird on the wire,
like a drunk in a midnight choir
I have tried in my way to be free.
Like a worm on a hook,
like a knight from some old fashioned book
I have saved all my ribbons for thee.
If I, if I have been unkind,
I hope that you can just let it go by.
If I, if I have been untrue
I hope you know it was never to you.
Like a baby, stillborn,
like a beast with his horn
I have torn everyone who reached out for me.
But I swear by this song
and by all that I have done wrong
I will make it all up to thee.
I saw a beggar leaning on his wooden crutch,
he said to me, You must not ask for so much.
And a pretty woman leaning in her darkened door,
she cried to me, Hey, why not ask for more?

Oh like a bird on the wire,
like a drunk in a midnight choir
I have tried in my way to be free.

Now I’ve heard there was a secret chord
That David played, and it pleased the Lord
But you don’t really care for music, do you?
It goes like this, the fourth, the fifth
The minor fall, the major lift
The baffled king composing Hallelujah

Your faith was strong but you needed proof
You saw her bathing on the roof
Her beauty and the moonlight overthrew you
She tied you to a kitchen chair
She broke your throne, and she cut your hair
And from your lips she drew the Hallelujah

You say I took the name in vain
I don’t even know the name
But if I did—well, really—what’s it to you?
There’s a blaze of light in every word
It doesn’t matter which you heard
The holy or the broken Hallelujah

I did my best, it wasn’t much
I couldn’t feel, so I tried to touch
I’ve told the truth, I didn’t come to fool you
And even though it all went wrong
I’ll stand before the Lord of Song
With nothing on my tongue but Hallelujah

#4. Lift me like an olive branch and be my homeward dove

Dance Me To The End Of Love:

#5. You know that she's half crazy
But that's why you want to be there

Suzanne takes you down to her place near the river
You can hear the boats go by
You can spend the night beside her
And you know that she’s half crazy
But that’s why you want to be there
And she feeds you tea and oranges
That come all the way from China
And just when you mean to tell her
That you have no love to give her
Then she gets you on her wavelength
And she lets the river answer
That you’ve always been her lover
And you want to travel with her
And you want to travel blind
And you know that she will trust you
For you’ve touched her perfect body with your mind.

#6. Sometimes I find I get to thinking of the past

Tonight Will Be Fine:

I choose the rooms that I live in with care,
the windows are small and the walls almost bare,
there’s only one bed and there’s only one prayer
I listen all night for your step on the stair.

A Bunch Of Lonesome Heroes:

A bunch of lonesome and very quarrelsome heroes
were smoking out along the open road
the night was very dark and thick between them,
each man beneath his ordinary load.
I’d like to tell my story,
said one of them so young and bold,
I’d like to tell my story,
before I turn into gold.
But no one really could hear him,
the night so dark and thick and green
well I guess that these heroes must always live there
where you and I have only been.
Put out your cigarette, my love,
you’ve been alone too long
and some of us are very hungry now
to hear what it is you’ve done that was so wrong.

It’s four in the morning, the end of December
I’m writing you now just to see if you’re better
New York is cold, but I like where I’m living
There’s music on Clinton Street all through the evening.
I hear that you’re building your little house deep in the desert
You’re living for nothing now, I hope you’re keeping some kind of record.

Yes, and Jane came by with a lock of your hair
She said that you gave it to her
That night that you planned to go clear
Did you ever go clear?

Ah, the last time we saw you you looked so much older
Your famous blue raincoat was torn at the shoulder
You’d been to the station to meet every train
And you came home without Lili Marlene

And you treated my woman to a flake of your life
And when she came back she was nobody’s wife.

She sends her regards.

#9. They sentenced me to twenty years of boredom

I’d really like to live beside you, baby
I love your body and your spirit and your clothes
But you see that line there moving through the station?
I told you, I told you, told you, I was one of those

Ah you loved me as a loser, but now you’re worried that I just might win
You know the way to stop me, but you don’t have the discipline
How many nights I prayed for this, to let my work begin
First we take Manhattan, then we take Berlin…

And who by brave assent, who by accident,
who in solitude, who in this mirror,
who by his lady’s command, who by his own hand,
who in mortal chains, who in power,
and who shall I say is calling?

How well do you know Leonard Cohen’s lyrics? Take this short quiz and find out. It is a quiz for the true lover of Cohen’s music.

Leonard Cohen was a Canadian singer, songwriter, poet, and novelist. He released his first music album in 1967, at the age of 33. When he died in 2016, at the age of 82, he had released 14 studio albums and several live albums. His music and lyrics have influenced artists and song writers all over the world.