You got this! Try another quiz?

#1. Who is the narrator of Anna Sewel's famous story Black Beauty?

The story is narrated in the first person as an autobiographical memoir told by the horse named Black Beauty.

#2. According to the children's tale, who had an encounter with the three bears?

The Story of the Three Bears was first recorded by British author and poet Robert Southey. The most popular version of the tale tells of Goldilocks who enters the forest home of three bachelor bears whilst they are away. She sits in their chairs, eats some of their porridge, and falls asleep in one of their beds.

#3. Astrid Lindgren, who wrote the books about Pippi Longstocking, was from which country?

Pippi Longstocking is the character in a series of children’s books by Swedish author Astrid Lindgren.

#4. Which fictional character solves mysteries in River Heights together with her friends, Bess Marvin and George Fayne?

Nancy Drew first appears in a book published in 1930. The books about Nancy have been ghostwritten by a number of authors under the collective pseudonym Carolyn Keene.

Nancy Drew lives in the fictional town of River Heights with her father, attorney Carson Drew, and their housekeeper, Hannah Gruen. Her two closest friends is Bess Marvin and George Fayne.

#5. Five on a Treasure Island (published in 1942) is a popular children's book written by:

Five on a Treasure Island by Enid Blyton was published in 1942. It is the first book in The Famous Five series.

#6. Who wrote the books about Winnie-the-Pooh?

Alan Alexander Milne was an English author, best known for his books about the teddy bear Winnie-the-Pooh and for various children’s poems.

#7. In which children's tale, credited Brothers Grimm, do two children find a cottage made of gingerbread?

In the fairy tale Hansel and Gretel, the two children follow a beautiful white bird to a clearing in the woods, where they discover a large cottage built of gingerbread.

#8. What animal is Aslan in The Chronicles of Narnia.

Aslan is the Great Lion and the main character of C. S. Lewis’s The Chronicles of Narnia series.

The eight original books, were published by Harper and Brothers with illustrations by Helen Sewell or by Sewell and Mildred Boyle.

#10. The Munchkins are the natives of the fictional Munchkin Country in which book?

Munchkins are characters in the book The Wonderful Wizard of Oz. 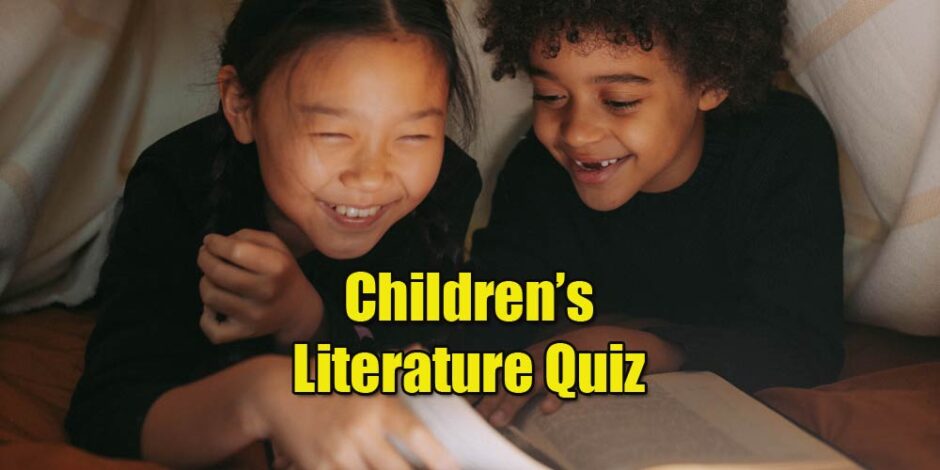 This literature has 10 easy questions about literature for children and teenagers.

There is no single or widely used definition of children’s literature. It generally spans over a wide range of works, including fairy tales, fables, fiction, poetry, or drama intended for and used by children and young people.

A Little Pretty Pocket-Book is often considered the first modern children’s book, since it was the first children’s publication aimed at giving enjoyment to children.

Later, Lewis Carroll’s fantasy, Alice’s Adventures in Wonderland, signaled the change in writing style for children to a more imaginative one.

C. S. Lewis published the first installment of The Chronicles of Narnia series in 1950, and J. R. R. Tolkien, the “father” of modern fantasy literature, wrote The Lord of the Rings a few years later.

7. The Great Adventures of Sherlock Holmes by Arthur Conan Doyle (1892)