Very good! Do you want to try another general knowledge quiz?

#1. Carlsberg is a beer brand originating from which country?

Carlsberg is the flagship beer brand in Danish Carlsberg Group’s portfolio of more than 500 brands. It was first brewed in 1904, and was created by Carl Jacobsen, son of Carlsberg’s founder JC Jacobsen.

#2. My Heart Will Go On is the main theme song from which movie?

My Heart Will Go On is the main theme song to the 1997 film Titanic. It is Celine Dion’s biggest hit and one of the best-selling singles in history. It topped the charts in both U.S. and overseas.

#3. In which country can you find the 15th-century Inca site Machu Picchu?

Machu Picchu is located in the Cusco region in Peru. Machu Picchu was built around 1450, at the height of the Inca Empire and is perhaps the most familiar icon of Inca civilization.

#4. How many instruments are in a string quartet?

A quartet is a group of four singers or four instrumentalists.

#5. Who played the title role as Maria in the film musical Sound of Music from 1965?

#6. The tennis tournament US Open is nowadays held where?

Flushing Meadows is a public park in New York City. It contains the USTA Billie Jean King National Tennis Center, which is the current venue for the U.S. Open tennis tournament.

#7. Bleak House (2005) is a BBC television drama serial adaptation of a novel by:

#8. Which country has the Internet top-level domain extension .es?

#9. According to the song, in what year did Bryan Adams get his first real six-string?

Summer of ’69 is a song recorded by Canadian recording artist Bryan Adams, from his fourth studio album, Reckless (1984). Opening lyrics are: I got my first real six-string Bought it at the five-and-dime Played it ’til my fingers bled It was the summer of ’69.

#10. In 1945, Alexander Fleming was awarded the Nobel Prize for his discovery of:

Sir Alexander Fleming was a Scottish biologist, pharmacologist and botanist. He discovered the antibiotic substance penicillin from the mold Penicillium notatum in 1928, for which he shared the Nobel Prize in 1945 with Howard Florey and Ernst Boris Chain.

The lyrics are from Bruce Springsteen’s Born To Run, released 1975.

#12. In Greek mythology, Narcissus was known for his:

In Greek mythology, Narcissus was known for his beauty. When he saw his own reflection in a pool of water, he fell in love with it, not realizing it was just an image, and drowned. Narcissus is the origin of the term narcissism, a fixation with the reflection or image that they portray to others.

Wal-Mart Stores, Inc., branded as Wal-Mart, is an American multinational retail corporation. The company was founded by Sam Walton in 1962 and incorporated in 1969. It has over 11,000 stores in 27 countries.

Mario is a fictional character in the video games created by Nintendo. Mario first appears as Jumpman in the arcade game Donkey Kong in 1981.

#15. Who's autobiography is entitled Dreams from My Father?

Dreams from My Father: A Story of Race and Inheritance is a memoir by Barack Obama. It was published in July 1995.

#16. In economics, a general slowdown in economic activity is known as:

A general slowdown in economic activity is known as a recession. It is a business cycle contraction. When a recession becomes uncontrollable it will lead to a depression.

#17. The Ural River flows through which two countries?

Hell’s Kitchen is an American reality television cooking competition (based on the British series of the same name) hosted by celebrity chef Gordon Ramsay.

Waka Waka (This Time for Africa) was released on May 7, 2010, by Sony Music Entertainment and Epic Records as the official song of the 2010 FIFA World Cup. It was recorded by Colombian singer-songwriter Shakira featuring South African band Freshly ground. It reached number one on the charts in more than 20 countries, but stayed on number 21 in U.K. and number 38 on Billboard Hot 100 in U.S.

#20. If you travel the Central Line from Holland Park to St Paul's, you are in which city?

The Central line is a London Underground service that crosses London from Ealing and Ruislip in the west to Stratford in East London before heading north-east to Epping in Essex. Two of the stops are St Paul’s and Holland Park. 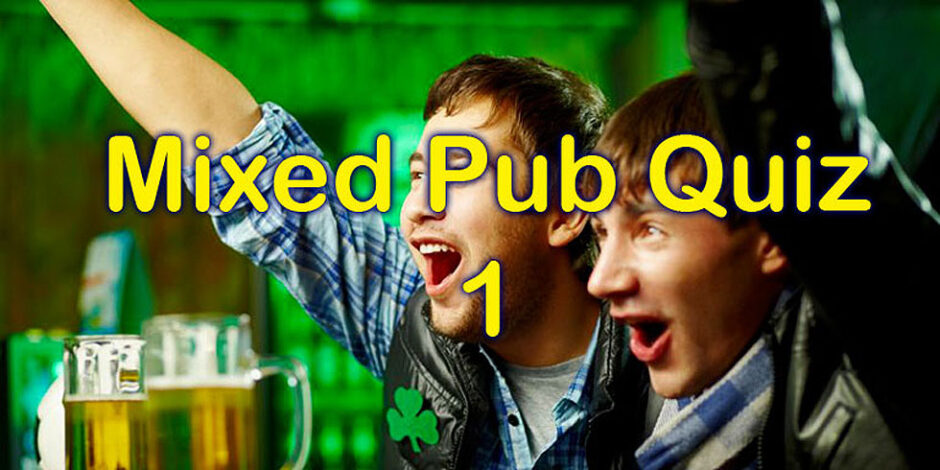 Getting warmed up to enjoy a Pub Quiz night with your friends? Prepare with these 20 typical general knowledge questions that often appear on quiz nights. They are neither too easy or too hard, just a medium-level pub mix.

The pub mix has questions about music, TV shows, science, geography and much more.