Well done! This score is above average.

This was not your thing, was it? Maybe you want to try another music quiz?

First recorded by Margie Singleton in 1968, but Jeannie C. Riley’s version was the one that topped the charts.

#2. I Second That Emotion

I Second That Emotion is a 1967 song written by Smokey Robinson and Al Cleveland. It was a hit for Smokey Robinson and the Miracles in 1967, peaking at No. 4 on Billboard Hot 100 and No. 27 in United Kingdom. Diana Ross & the Supremes and The Temptations recorded a cover of the song in 1969. This version peaked at #19 in the UK.

Bus Stop is recorded by the British pop band The Hollies in 1966. It reached No. 5 in the UK Singles Chart and No. 5 on the Billboard charts in September 1966.

Wichita Lineman is written by Jimmy Webb and recorded by Glen Campbell. The song peaked at No. 3 in United States and at No. 7 in U.K.

Walk Like a Man is a song written by Bob Crewe and Bob Gaudio and originally recorded by the Four Seasons in 1963.

Bits and Pieces is a 1964 hit by The Dave Clark Five. The single reached number two in the UK and number four in the US.

Don’t Bring Me Down is a song composed by Gerry Goffin and Carole King and recorded as a 1966 hit single by The Animals. It reached at no. 6 in UK and no. 12 on Billboard Hot 100.

Dizzy is a number one hit originally recorded by Tommy Roe. It topped the Billboard Hot from the week ending March 15 until April 5 in 1969. The song also topped the charts in Canada and U.K.

Saved by the Bell is a song written and recorded by Robin Gibb. It reached no. 2 on the British charts but had less success in United States.

Green River is a song by Creedence Clearwater Revival released in 1969. 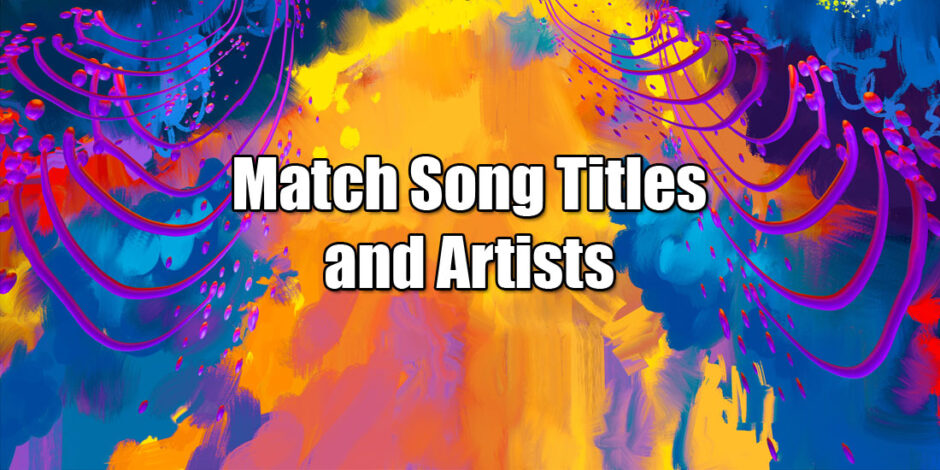 Can You Match the Song Titles with the Artists?

This quiz gives you 10 classic song titles from the 1960s, your task is to match the title with the correct artist or artists.

Most songs were international hits and reached the No. 1 position on the music charts.

The quiz is easy enough for the 1960s-music fan, but maybe not so easy for a younger generation.

The average score on this quiz is less than 7 correct answers. Can you do better?

Note: your interactive quiz does not necessarily have the same song titles!

This quiz was originally published as an “easy 1960s quiz” by Utimate60s, a website that was discontinued in 2021.