#1. Four of the original members of this band were Brian Jones, Mick Jagger, Keith Richards, and Charlie Watts. Who was the fifth member?

Stewart was very quickly removed from the official line-up, but continued as occasional pianist until his death in 1985.

#2. Who plays the role as the martian in the TV series My Favorite Martian?

Ray Walston was an American actor and comedian, best known as the title character on My Favorite Martian, an American television sitcom that aired on CBS from September 29, 1963, to May 1, 1966.

Konrad Adenauer was Chancellor of the Federal Republic of Germany (West-Germany) during the following periods:

next
Note: The clip will play for 15-30 seconds or until you stop it!

#4. Listen to the clip. What is the name of the group?

Turn! Turn! Turn! is originally written by Pete Seeger and released by The Limeliters. The Byrds released the song as their3rd single in 1965. Their version peaked at number 1 on the Billboard Hot 100 chart and number 26 on the UK Singles Chart.

#5. Which of these companies was established in the 1960s?

Boris Spassky became the 10th World Chess Champion, holding the title from 1969 to 1972. He is known as one of the greatest chess players of all time.

#7. The Oscar winning song Moon River is featured in which movie?

Moon River is composed by Henry Mancini with lyrics written by Johnny Mercer. It got an Oscar for Best Original Song at the 34th Academy Awards in 1962. The song is featured in the 1961 movie Breakfast at Tiffany’s and was performed by Audrey Hepburn in the film. It also won the 1962 Grammy Award for Record of the Year and the Grammy Award for Song of the Year.

It was a hit single for Jerry Butler in late 1961, reaching number 11 on the Billboard Hot 100. A recording by Mancini himself reached the same spot. In UK, South African singer Danny Williams reached number one with his version of the song. The best remembered version of the song, however, is perhaps the one recorded by Andy Williams.

#8. What year did RCA Victor Records start releasing all pop singles in both mono and stereo?

#9. Robert Rauschenberg is mainly know for his:

#10. Who played Captain Virgil Hilts in the 1963 film The Great Escape?

The Great Escape is a 1963 American film based on an escape by British and Commonwealth prisoners during World War II. The film was directed and produced by John Sturges. Steve McQueen plays Capt. Virgil Hilts, the Cooler King. James Garner plays Flt. Lt. Robert Hendley, the Scrounger. Other roles are plated by Richard Attenborough, Charles Bronson, James Coburn, and David McCallum. The British singer John Leyton also has a role in this movie. 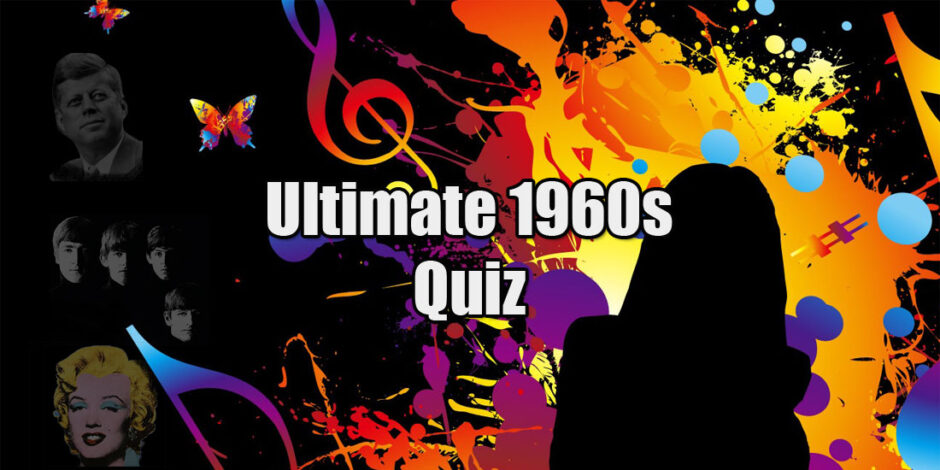 This 1960s general knowledge quiz has 10 random questions about memorable people and events from a decade that changed the world.

Each set of questions is drawn from a pool of 300 questions in our database, which means that each quiz will be unique and different from the previous.

The quiz is considered hard and the average score is just above 50 percent.

What Kind of Questions are on the Sixties Quiz?

Other questions focus on famous persons like celebrities, politicians, writers, and painters.

This quiz was originally published as “trivia questions for the 1960s” on Ultimate60s.com, a website that was discontinued in 2021.