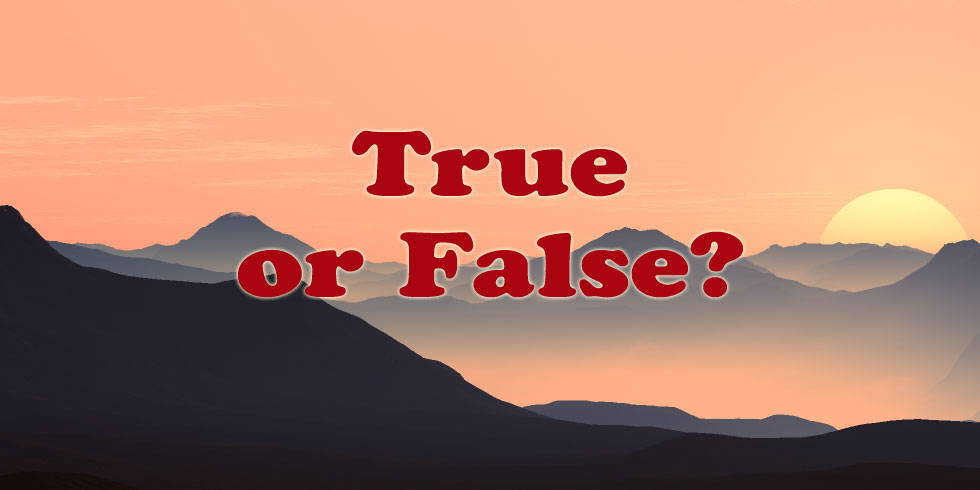 This is a very good score on a hard quiz. Do you want to try another true-or-false quiz?

True or False – I

This was a hard quiz. Do you want to try another true-or-false quiz?

True or False – I

#1. John Travolta was offered the title role in Forrest Gump but turned it down.

#2. Yellow River (Huang He) is the longest river in the world.

The Yellow River (Huang He) is considered the 6th river by length (5,464 km). While there exists some disagreement as to whether the Nile or the Amazon is the world’s longest river, the Nile is more commonly mentioned as the longest.

#3. Elephants are pregnant for approximately 9 months, just like humans.

False. On average, elephants are pregnant for 624 days (the gestation period between conception and birth).

Sam Walton originally bought a branch of the Ben Franklin stores from the Butler Brothers. When he opened his own store, it was named Walton’s Five and Dime. The store named “The Golden Rule” was opened by James Cash Penney, the founder of what was to become JCPenney.

#6. John Lennon returned his MBE to the Queen in protest against his song Cold Turkey slipping down the charts.

Typical Lennon irony, but true. When returning the MBE, John Lennon spelled out his reasons in a letter to the Queen: Your Majesty, I am returning this in protest against Britain’s involvement in the Nigeria-Biafra thing, against our support of America in Vietnam and against Cold Turkey slipping down the charts. With Love, John Lennon of Bag.

#7. The flag of Honduras features an image of a firearm.

#8. During his career John Wayne got 11 Oscar nominations for Best Actor but never won the Award.

This is false. During his 50 years in the film industry, John Wayne got three Oscar nominations for his roles in Sands of Iwo Jima (1949). The Alamo (1960), and True Grit (1970). He won his only acting Academy Award for his role in True Grit.

#9. Michael Phelps (USA) holds the record of most Olympic gold medals won by a male athlete.

True. Phelps is the most decorated Olympian of all time, winning 28 Olympic medals including an all-time record of 23 gold medals.

Currently, 4,600 species of cockroaches and over 460 genera are described worldwide.

This True or False Quiz

The True or False Quiz No. 2

Many people find that they can remember meaningless trivia such as members of rock bands from the 1960s or baseball results but find it harder to remember the things that they really need. If you are one of these persons and really love trivia quizzes with “meaningless” facts, this true or false quiz may be the thing for you.

The quiz has 10 questions spanning from music and films to geography and animals.