This is a very good score on a hard quiz. Do you want to try another true-or-false quiz?

Do you want to try another true-or-false quiz?

Lions get 30 teeth in their lifetimes. But there are animals out there with the same number of teeth as humans. Giraffes have 32 teeth too!

#2. Earth makes two trips around the sun in about the same amount of time that Mars takes to make one trip.

Earth is closer to the sun, and therefore races along its orbit more quickly. Earth makes two trips around the sun in about the same amount of time that Mars takes to make one trip.

#3. Whitney Houston's super-hit I Will Always Love You was originally written and recorded by Dolly Parton.

The song is written and originally recorded in 1973 by Dolly Parton. It was written as a farewell to her former business partner and mentor of seven years, Porter Wagoner, following Parton’s decision to leave The Porter Wagoner Show and pursue a solo career.

#4. Sweden had a colony in North America in the 17th century.

Sweden established colonies in the Americas in the mid-17th century, including the colony of New Sweden (1638-1655) on the Delaware River in what is now Delaware, New Jersey, Pennsylvania, and Maryland.

#5. Every time a month begins on a Monday, it will have Friday the 13th.

If a month begins on a SUNDAY, the 13th will be a Friday.

#6. British chef and restaurateur Gordon Ramsay has a bachelor's degree in psychology.

No, he does not have a bachelor’s degree in psychology. At age 19, Ramsay enrolled at North Oxfordshire Technical College to study hotel management. In the early 1980s, he worked as a commis chef at the Wroxton House Hotel then ran the kitchen and 60-seat dining room at the Wickham Arms.

#7. China is the 2nd largest country by area.

China has the largest population in the world, with over 1.3 billion people. It is the 3rd or 4th largest country by area. The order depends on what you want to calculate as total territory and that is also dependent on the validity of certain claims to territory. Total official territories and territorial waters combined, the USA is slightly larger. If all of China’s claims for territories are included, China is larger. If you just take mainland China and the lower 48 states, China is bigger. Add Alaska and Hawaii to that, they’re really close in total land area.

#8. Ellen DeGeneres was offered the role of Phoebe in the American sitcom Friends, but turned it down.

Yes, Ellen DeGeneres was offered the role of Phoebe in the American sitcom Friends, but turned it down. Reason unknown.

#9. Entomology is the study of insects.

True. Entomology is the study of insects. Entomology is crucial to our understanding of human disease, agriculture, evolution, ecology, and biodiversity.

#10. Albert Einstein was once offered the position of President of Israel.

#12. Eggplant (aubergine) is a vegetable.

Eggplant (or aubergine) is a species of nightshade that is grown for its edible fruit. Botanically, the fruit is classified as a berry.

#13. Mark Twain published his first novel when he was 15 years old.

False. Mark Twain published his first novel (The Gilded Age: A Tale of Today) in 1873 when he was 37 years old.

#14. Thomas Jefferson served as the third president of the United States.

Thomas Jefferson was an American statesman, diplomat, lawyer, and architect who became the third president of the United States.

#15. Argentina is the only country in South America where the official language is Portuguese.

This True or False Quiz 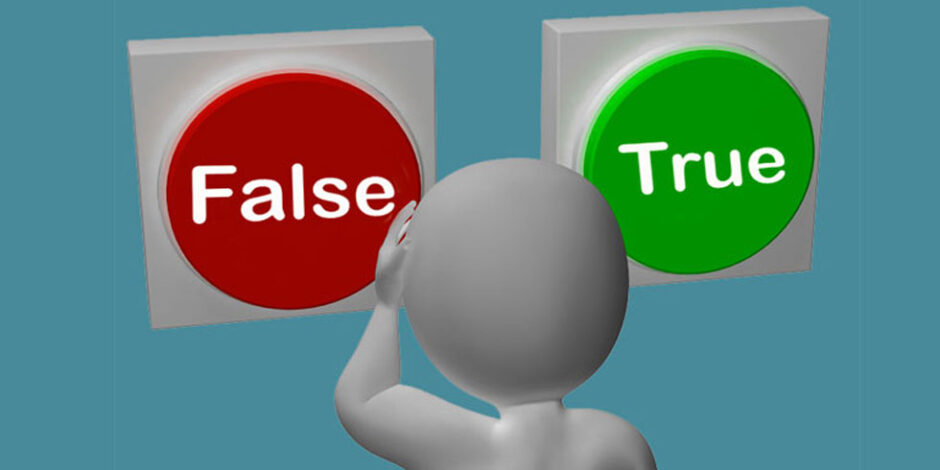 Is it the Truth or a Fake Statement?

Can you tell if these facts are true or false? The quiz has 15 questions. It is a fun challenge for young and old. It’s a 50% chance to get each question right, but the correct answer isn’t always what you think…

Take the challenge and see if you can do better than your friends.

The average score on this quiz is just below 7.