Great job! Do you want to try another music quiz?

Baker Street is a song written and recorded by Scottish singer-songwriter Gerry Rafferty. Released as a single in 1978, it reached No. 1 in Cash Box and No. 2 on the Billboard Hot 100.

We’re an American Band is a song by Grand Funk Railroad. It became the band’s first No. 1 single.

Hold Your Head Up is a song by the English rock band Argent, released as a single in 1972.

American Woman (1970) is a song released by the Canadian rock band The Guess Who.

#5. How Can You Mend a Broken Heart

How Can You Mend a Broken Heart is a song released by the Bee Gees in 1971.

I’m Your Boogie Man is a song written and produced by Harry Wayne Casey and Richard Finch, and performed by Casey’s band KC and the Sunshine Band

#7. Love Grows (Where My Rosemary Goes)

Love Grows (Where My Rosemary Goes) is a song by Edison Lighthouse (1970), originally recorded by Jefferson.

(You’re) Having My Baby is a song written and recorded in 1974 by Canadian singer Paul Anka.

#10. Sometimes When We Touch

Sometimes When We Touch is a 1977 ballad first released as a single by Dan Hill. 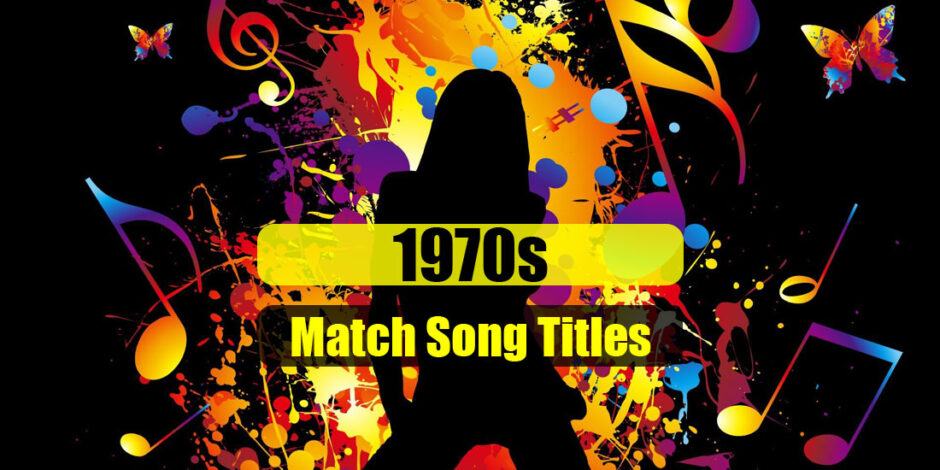 In this quiz you are given 10 song titles from the 1970s pop charts, your task is to match them with the original artist or artists.

1970 started with the Beatles breakup. But instead of leaving a vacuum on the music scene, new and bold music acts unfolded.

As a great contrast to the pop and rock music Beatles represented, The Sex Pistols and The Clash gave birth to the British Punk Music. Between 1977-1979 Sex Pistols had six hits on British Top 10.

This decade also saw the rise of hard rock and disco music. Progressive rock with bands like Frank Zappa, Captain Beefheart, and Blood, Sweat and Tears also had many followers during the seventies.

But pop and soft rock was still popular and saw groups like the Carpenters, the Jackson 5, the Osmonds, Hall & Oates, Bread, Captain & Tennille, Tony Orlando and Dawn, and Bay City Rollers top the charts in United States and internationally.

The Most Popular Song in 1970s

In Great Britain, Queen, Wings, and Olivia Newton-John and John Travolta parked themselves for 9 weeks each on the U.K. Singles Charts. Boney M., Abba, and Village People were also extremely popular in U.K. during this decade.

In United States, Simon and Garfunkel released their iconic Bridge over Trouble Water, Bee Gees dominated the disco scene, and Debby Boone had a 10-week number 1 hit on Billboard Hot 100 with You Light Up My Life.

The quiz has some more memorable seventies song titles. Do you remember which artist or artists that hit the charts with these songs?