A true Beatles fan? Do you want to try the Beatles Lyrics Quiz?

A true Beatles fan? Do you want to try the Beatles Lyrics Quiz?

#1. In March 1966, John Lennon is quoted in The Evening Standard as saying that the Beatles was now more popular than:

In March 1966, John Lennon told Maureen Cleave for the London Evening Standard that Christianity was in decline and that the Beatles had become more popular than Jesus Christ. Not until the band was to begin their US Tour in August, five months later, extensive protests broke out in the Southern United States. Radio stations stopped playing Beatles songs, their records were publicly burned, press conferences were cancelled, and threats were made. The US tour in 1966 was the last the band undertook before becoming a studio-only band.

#2. According to the Beatles, Sweet Loretta Martin thought she was what?

Sweet Loretta Martin appears in the Beatles song Get Back, released as a single on 11 April 1969 and credited to the Beatles with Billy Preston.

Sweet Loretta Martin thought she was a woman
But she was another man.

#3. Which song by the Beatles starts a Wednesday morning at five o'clock?

#4. Who directed the Beatles film A Hard Day's Night?

A Hard Day’s Night is a 1964 British film directed by Richard Lester. The film portrays several days in the lives of the Beatles. Lester is also known for his work on the Superman film series in the 1980s.

#5. Which album was released before the other three?

#6. Who is the only non-beatles-member to receive a label performance credit on a Beatles record?

Billy Preston is credited on the Beatles single Get Back. He is the only musician besides the band members to receive a label performance credit together with the Beatles.

The original version of My Bonnie from 1961, credits Tony Sheridan with The Beat Brothers (later known as the Beatles).

#7. Which was the first original single after Please Please Me that failed to top the UK charts?

Penny Lane/Strawberry Fields Forever became the first Beatles single since Please Please Me in 1963 to fail to top the UK charts. Engelbert Humperdinck’s Release Me was the single that kept Beatles from the top spot in 1967.

#8. The song Dear Prudence was inspired by the sister of which actress?

Dear Prudence was released as the second track on Beatles 1968 album, commonly known as The White Album. The song is inspired by Prudence Farrow, the sister of actress Mia Farrow.

#9. According to the song by the Beatles, living is easy with:

The following lyrics are from Strawberry Fields Forever, recorded by the Beatles and released in February 1967 as a double A-side with Penny Lane:

#10. In what year did Beatles give their last public performance?

On January 30, 1969, the Beatles gave their last public performance on the roof of Apple Records, London. The concert is often referred to as the Rooftop Concert. During 42 minutes, the Beatles played nine takes of five songs before the police forced them to stop. The concert was later used in the film Let it Be. 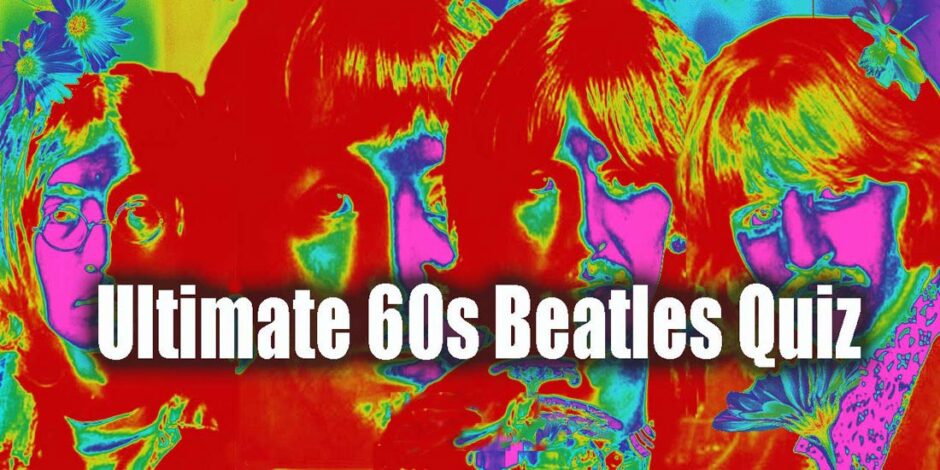 The Beatles is undoubtedly one of the most influential pop and rock groups of the twentieth century. During their short career that spanned over 8-9 years in the sixties, they had an enormous impact on pop music, not only in Britain and United States, but across the world.

After struggling in Hamburg, Germany, in the early 1960s, they finally cut a record deal with Parlophone. Their first single on Parlophone was “Love Me Do” which peaked at No. 17 when originally released in the United Kingdom on 5 October 1962.

Please Please Me is their second single in Britain, and their first in the United States. It went to No. 1 on the New Musical Express and Melody Maker charts, but not Record Retailer, and didn’t make much of an impact in United States.

Then followed From Me to You, She Loves You, I Want to Hold Your Hand, and Can’t Buy Me Love and Beatlemania struck the world, including United States.

If you are a true Beatles fan, you probably don’t have any problems answering these trivia questions about the Beatles.

Do you think you can reach a perfect score on this quiz? The average result is six correct answers.

Note: This quiz was originally published on ultimate60s, a website that was discontinued in 2021.