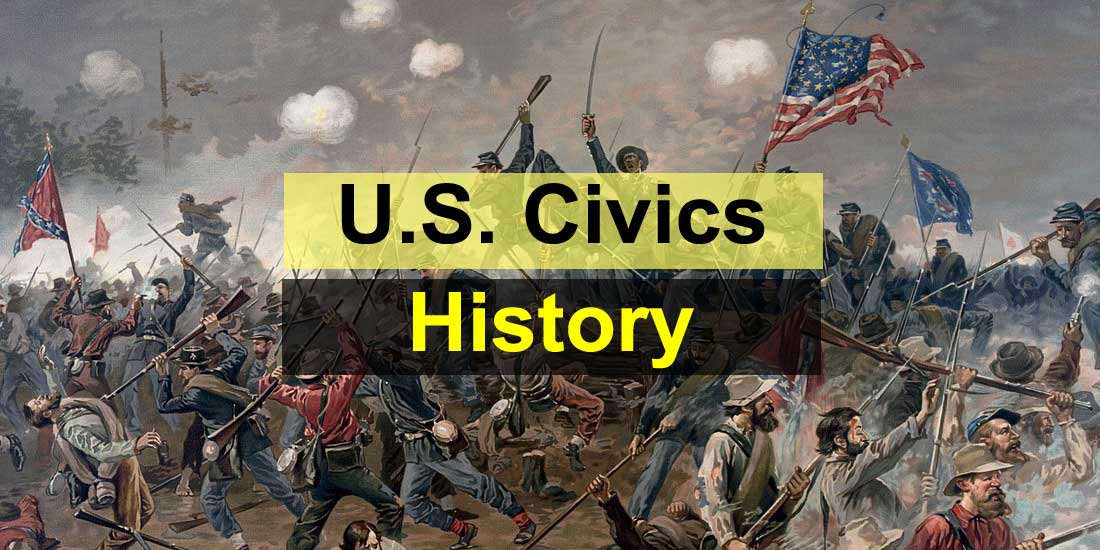 #1. Which is one major reason colonists came to America?

In the 1600s and 1700s, colonists from England and other European countries sailed across the Atlantic Ocean to the American colonies. Some left Europe to escape religious restrictions or persecution, to practice their religion freely. Many came for political freedom, and some came for economic opportunity. These freedoms and opportunities often did not exist in the colonists’ home countries. For these settlers, the American colonies were a chance for freedom and a new life. Today, many people come to the United States for these same reasons.

#2. Who lived in America before the Europeans arrived?

Great American Indian tribes such as the Navajo, Sioux, Cherokee, and Iroquois lived in America at the time the Pilgrims arrived. (Native Americans).

#4. Name one American Indian tribe in the United States.

#5. Which is one thing Benjamin Franklin is famous for?

Benjamin Franklin was one of the most influential Founding Fathers of the United States. He was the oldest delegate to the Constitutional Convention and one of the signers of the U.S. Constitution. He was a printer, author, politician, diplomat, and inventor. By his mid-20s, he was an accomplished printer, and he began writing books and papers. Franklin’s most famous publication was Poor Richard’s Almanac. He also organized America’s first library. Its members loaned books to one another. He was very active in colonial politics. He also visited England and France many times as a U.S. diplomat. In 1775, the Second Continental Congress appointed Franklin the first postmaster general.

#6. Who is known as the Father of Our Country?

George Washington is called the Father of Our Country. He was the first American president. Before that, he was a brave general who led the Continental Army to victory over Great Britain during the American Revolutionary War. After his victory over the British Army, Washington retired to his farm in Virginia named Mount Vernon. He left retirement to help create the new country’s system of government. He presided over the Constitutional Convention in Philadelphia in 1787.

#7. When was the Constitution written?

#8. During the Cold War, which was a main concern of the United States?

The main concern of the United States during the Cold War was the spread of communism. The Soviet Union (Union of Soviet Socialist Republics, or USSR) was a powerful nation that operated under the principles of communism. The United States and its allies believed that a democratic government and a capitalist economy were the best ways to preserve individual rights and freedoms.

#9. What happened at the Constitutional Convention?

#10. Who did the United States fight in World War II?

The Japanese bombed U.S. naval bases in a surprise attack on Pearl Harbor, Hawaii, on December 7, 1941. The next day, President Franklin D. Roosevelt, as commander in chief of the military, obtained an official declaration of war from Congress. Japan’s partners in the Axis, Italy and Germany, then declared war on the United States. The Allies fought against the German Nazis, the Italian Fascists, and Japan’s military empire. This was truly a world war, with battles fought in Europe, Africa, Asia, and the Pacific Ocean.

#11. Why did the colonists fight the British?

The American colonists’ anger had been growing for years before the Revolutionary War began in 1775. The decision to separate from the British was not an easy choice for many colonists. However, Great Britain’s repeated injuries against the Americans, as noted in the Declaration of Independence, convinced many to join the rebellion. The British taxed the colonists without their consent, and the colonists had nobody to represent their needs and ideas to the British government. They were also angry because ordinary colonists were forced to let British soldiers sleep and eat in their homes. The colonists believed the British did not respect their basic rights. The British governed the colonists without their consent, denying them self-government.

#12. Which group of people was taken to America and sold as slaves?

Slavery existed in many countries long before America was founded. By 1700, many Africans were being brought to the American colonies as slaves. Men, women, and children were brought against their will. They were often separated from their families when they were sold as slaves. Slaves worked without payment and without basic rights. Most worked in agriculture, but slaves did many other kinds of work in the colonies, too.

#14. Who was President during the Great Depression and World War II?

Franklin Delano Roosevelt (FDR) was president of the United States from 1933 until 1945. He was elected during the Great Depression, which was a period of economic crisis after the stock market crash of 1929. His program for handling the crisis was called the New Deal. It included programs to create jobs and provided benefits and financial security for workers across the country. Roosevelt led the nation into World War II after Japan’s attack on Pearl Harbor in December 1941. He gave the country a sense of hope and strength during a time of great struggle. Roosevelt was elected to office four times. He died in 1945, early in his fourth term as president.

#15. Who was a leader in the civil rights movement and worked for equality for all Americans?

Martin Luther King, Jr. was a Baptist minister and civil rights leader. He worked hard to make America a more fair, tolerant, and equal nation. He was the main leader of the civil rights movement of the 1950s and 1960s. Because of this movement, civil rights laws were passed to protect voting rights and end racial segregation.

#16. Which is one problem that led to the Civil War?

#17. Which territory did the United States buy from France in 1803?

The Louisiana Territory was a large area west of the Mississippi River. In 1803, the United States bought the Louisiana Territory from France for $15 million. It was the largest acquisition of land in American history. Farmers could now ship their farm products down the Mississippi River without permission from other countries. This was important because the city of New Orleans was a major shipping port. The Louisiana Purchase doubled the size of the United States and expanded it westward.

On September 11, 2001, four airplanes flying out of U.S. airports were taken over by terrorists from the Al-Qaeda network of Islamic extremists. Two of the planes crashed into the World Trade Center’s Twin Towers in New York City, destroying both buildings.

#19. What did the Emancipation Proclamation do?

#20. When was the Declaration of Independence adopted?

It was adopted by the Continental Congress on July 4, 1776.

Check your Knowledge of American History

This quiz has 20 quiz questions about American history based on the history chapters from the citizenship exam guide.

The quiz can help you study and pass your U.S. citizenship exam with flying colors. To achieve a passing score on the naturalization test, you must answer 6 out of 10 questions correctly.

What is the Average Score on This quiz?